Join the PLC for a Film, a Program, and a Demo & Nonviolent Action at Lockheed Martin!

Posted on February 19, 2019 by Subversive Peacemaker

The Pacific Life Community is a network of spiritually motivated activists from U.S. Pacific coast and other western states who engage in anti-nuclear direct action. They protest at different nuclear weapons-related sites each year on or around March 1, which is Nuclear-Free and Independent Pacific Day and the anniversary of the Bravo nuclear bomb detonation by the U.S. at the Bikini Atoll in 1954. Visit https://pacificlifecommunity.wordpress.com/

at the Vallombrosa Center Chapel

250 Oak Grove Ave., Menlo Park, CA
Free, donations accepted.
Bruce Gagnon is coordinator of Global Network Against Weapons and Nuclear Power in Space and a member of Veterans for Peace.
Emma’s Revolution brings their musical uprising of truth and hope to concerts and peace & justice events across the country.
Call 650-649-8690 or 650-366-4415 for more information.
**********

A special screening of
The Nuns, The Priests and The Bombs
A film about the Disarm Now Plowshares and Transform Now Plowshares actions, by filmmaker Helen Young
Two groups of Catholic nuclear disarmament activists engaged in these plowshares actions, entering the Bangor Trident nuclear submarine base in WA in 2009 and the Y-12 nuclear weapons complex in TN in 2012 to challenge the morality and legality of

Join us at Lockheed Martin, the largest military weapons contractor in the world, 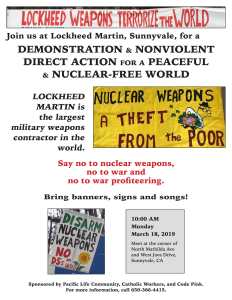 to say no to nuclear weapons, no to war and no to war profiteering.
Monday March 18, 2019
10 a.m.
Meet at the corner of North Mathilda Ave and West Java Drive, Sunnyvale, CA
Bring banners, signs and songs!
Sponsored by Pacific Life Community, Catholic Workers, and Code Pink.
For more information, call 650-366-4415.