Posted on March 4, 2015 by Subversive Peacemaker

To conclude the 2015 gathering of the Pacific Life Community, 80 activists held a colorful and lively demonstration on Monday, March 2 at Lockheed Martin in Sunnyvale, California, protesting nuclear weapons work and other weapons for war.

After sharing poetry, litany, dancing and songs, twelve of the protesters spread across the entrance roadway with a 50 foot banner that read “Lockheed Weapons Terrorize the World” to stop traffic going into the weapons plant. 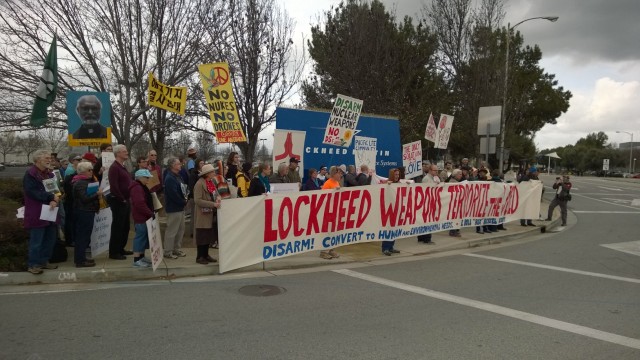 They carried a letter with them that read:

“To All of Us Who Pay Taxes or Work at Lockheed Martin,

“Lockheed Martin is the world’s largest weapons producer. The nuclear missiles that Lockheed Martin designs and builds are a threat to all life on earth. We ask you to evaluate the morality of profit from world-wide death and suffering.

“This is the time to transform Lockheed Martin’s reliance on weapons production into new technologies that help the earth and benefit the common good.”

The group was arrested and charged with blocking traffic. Four of the protesters were released that afternoon, and one later that evening. Seven who refused to sign papers for their release are in jail until they can be seen by a judge. 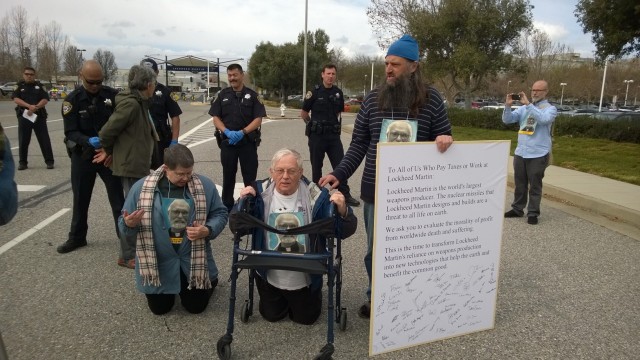 Many of the activists wore a photo of Fr. Bill “Bix” Bichsel, in remembrance of the long-time nuclear resister, Jesuit priest, Catholic Worker and member of the Pacific Life Community (PLC) from Tacoma, Washington who died at home on February 28.

The Pacific Life Community is a network of spiritually motivated U.S. activists from the Pacific Coast and other western states committed to nonviolent action for a nuclear-free future. 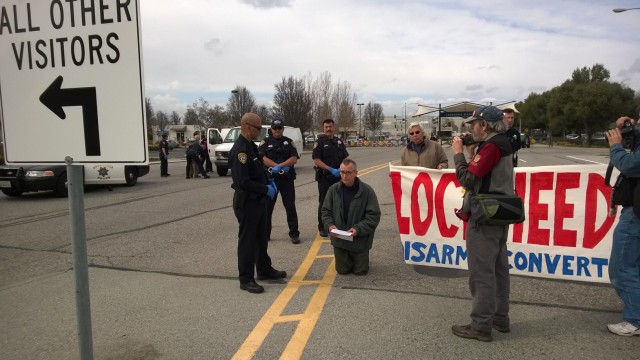 Since last summer’s Israeli devastation of the Gaza Strip, California PLC activists have also been educating themselves and the public about Lockheed Martin’s role in supplying Hellfire missiles, Apache Longbow helicopter parts and F-16 jets to Israel, all of which have caused immense civilian casualties and war crimes against the Palestinian people, according to numerous international and Israeli organizations (including the United Nations and B’Tselem).

This report is posted here: http://www.nukeresister.org/2015/03/03/twelve-nuclear-disarmament-activists-arrested-at-lockheed-martin-in-california/

Photos will be added later to The Nuclear Resister and Pacific Life Community Facebook pages.