PLC resisters have their say in court

Posted on May 8, 2013 by Subversive Peacemaker

On March 4, 2013 twenty peace activists from around the United States were arrested as a result of their nonviolent protest against nuclear weapons at Naval Base Kitsap-Bangor in Silverdale, Washington.  Members of the Pacific Life Community had gathered at the Bangor base’s Main Gate early that morning in resistance to the continued deployment of the Trident nuclear weapons system and the associated threat of use of nuclear weapons by the U.S. government.

While maintaining a peaceful vigil along the roadway, six of the resisters entered the roadway with a banner, which they stretched across the entrance lanes in symbolic closure of the base. The banner quoted Martin Luther King Jr.: “When scientific power outruns spiritual power, we end up with guided missiles and misguided men.”  The protesters also knelt in prayer. 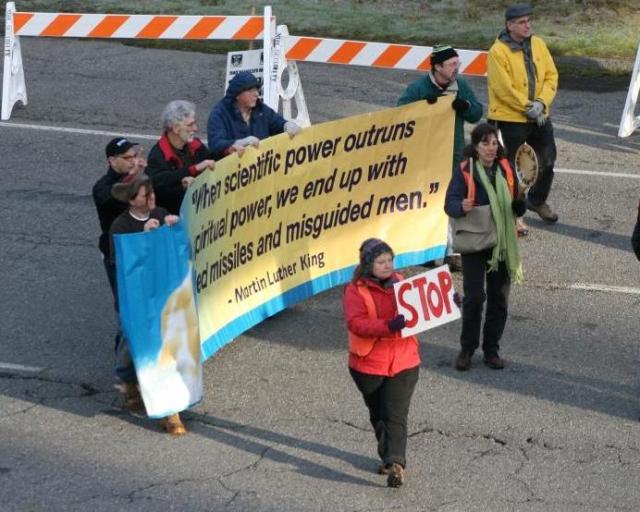 Washington State Patrol officers ordered the protesters to leave the roadway. All six protesters complied with the officers and were escorted to the median where they were briefly detained and issued citations for “Walking on roadway where prohibited.”

The other resisters were arrested by military personnel after crossing the blue line onto Federal property.  You can read more about the vigil and action in the March 4th news release. 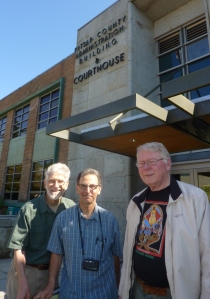 Three of those cited – Leonard Eiger, Tom Karlin and Cliff Kirchmer – requested mitigation hearings before a judge in order to present individual statements on the reasons for their actions that day.  All three resisters appeared together in Kitsap District Court in Port Orchard before Judge Steven L. Olsen.  Each resister read his statement to the court.  In unified, yet individual, voices, the defendants spoke out against the immorality and illegality of the continuing threat of use of nuclear weapons, as well as the tremendous costs, both human and economic, of their continued development and deployment.

(Note: The statements are listed in the order presented to the judge.)

Judge Olsen showed interest and appreciation as he listened to the defendant’s statements.  Witnesses in the courtroom overheard the judge say, “I appreciate your activism” after Kirchmer finished his statement.  After the last statement Judge Olsen said, “Well done.”  He mitigated each resister’s fine down to the minimum amount of twenty-five dollars. 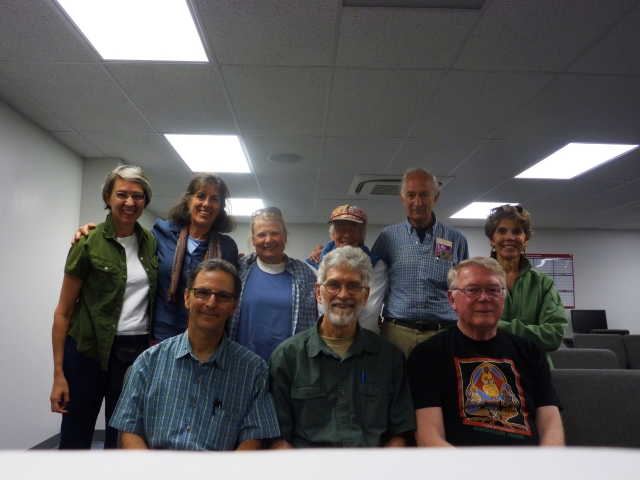 Defendants (in front) with supporters who witnessed the proceedings
(photo: Laura Karlin)

The other three resisters who were cited by the State Patrol were unable to appear in court due to geographical distance or work.  The other fourteen resisters were arrested on the Federal side by Naval authorities.  So far a few have received ban and bar letters (which prohibit them from coming back on the base) from the Navy, although none have yet been notified to appear in Federal court.

The Bangor Trident base is home port to eight of the nation’s 14 Ohio class nuclear ballistic missile submarines and also home to the Strategic Weapons Facility, Pacific, where the Navy stores thermonuclear warheads for deployment on its submarines.  Bangor represents the largest single operational concentration of nuclear weapons in the U.S. arsenal and possibly in the entire world.

The Navy is currently in the research and development phase of its plan to build 12 new ballistic missile submarines to replace the existing Trident fleet at an estimated (construction) cost of $100 Billion!

Finally – On a related note I want to mention that fellow resisters who engaged in the Good Friday witness at Lockheed Martin (which makes the Trident missiles) in Sunnyvale, California will have their day in court on May 13th.  Also, we hold our good friends Megan Rice, Greg Boertje-Obed and Michael Walli in our thoughts and prayers following their being found guilty by a jury of the charges stemming from their Transform Now Plowshares action.